We include below links to various articles dealing with improving student achievement and leading system-wide reform. These articles are written by Targeted Leadership senior executives and consultants.

Superintendent Ross sat in her office looking at a list of the schools and principals in her district. On her desk was a stack of data information about each school on a number of topics that included student achievement, attendance, and programs. She reflected on the support each principal was receiving. Currently, every principal receives coaching visits from members of Cabinet on an informal basis. In addition, she visits schools regularly. Based on the data she was reviewing, this was working for some principals but not all. It was obvious that some changes were needed in order to support these administrators. Giving everyone the same, an equality model, was going to need to become giving what each administrator needed, an equity model.

Superintendent Ross’ interest in providing a differentiated model of support for her principals is a concept being discussed in many districts. Targeted Leadership Consulting (TLC) has been working with a number of districts that are implementing different models of support. One of these districts is the Chula Vista Elementary School District, a pre-Kindergarten through sixth grade district in southern San Diego County, California, serving approximately 27,000 students in 44 schools. Chula Vista is a diverse community that includes newer, more affluent homes as well as older, more impoverished areas. Thirty seven percent of the students are classified as English Language Learners, the majority of whom speak Spanish as their primary language.

Establishing a Protocol for Support

In November 2007, Targeted Leadership Consulting was commissioned to conduct a Systems Review to identify existing support structures for principals and identify training needs for the five Executive Directors (EDs) who provide coaching to the 44 principals in the district. The ED’s were also responsible for central services including Special Education, Bilingual Support, Curriculum and Instruction, Assessment, and Early Childhood Programs. The study included a survey taken by all principals, and interviews with a focus group that represented a geographic cross section of the schools as well as administrators of differing experience levels.

Four major components were identified as a result of the study: (1) assign EDs to specific principals based on ED expertise and principal need; (2) identify amount of coaching support based on school performance and principal leadership skill and experience; (3) develop a structured coaching protocol; and (4) train EDs on coaching skills.

The result of this input was the development of a structured coaching model that matched the number of visits with different variables, the principal’s experience and school performance being two of the most prominent. Several factors were involved in identifying a school as underperforming – including statewide and local assessment measures and whether they were meeting goals and showing continuous improvement. Several factors were also considered in placing principals in either the developing or strong categories – all new principals or principals new to their school were automatically identified as developing, for example. The placement of the schools on the matrix was first done by the EDs and then adjusted and approved by the Superintendent and his cabinet. The table below illustrates the different levels of coaching intensity based on each principal’s or site’s identified needs.

In addition to identifying school and principal needs, TLC consultants supported the EDs with coaching training. This was done in two ways: leadership retreats and walkthrough calibration visits. Two leadership retreats focused on establishing a consistent protocol for coaching visits that included a standard “coaching log” that summarized each coaching visit. The protocol would be used at each school visit, and included a review of school goals agreed upon at the last visit, a review of recent data, a walkthrough of classrooms with a targeted purpose, and the setting of new goals based on the data collected during that coaching visit.

The formalization of the coaching visits with “coaching logs” accomplished a number of objectives. One of those was the creation of a sense of accountability, and in some cases, a sense of urgency.

In addition to establishing the visit protocol, the EDs needed to calibrate their perceptions of what constituted strong classroom practice around different district initiatives. This involved monthly group walkthroughs that were facilitated by TLC consultants. Not only were EDs gaining greater clarity around district initiatives, discussions of successful strategies for working with different principals were shared, ultimately resulting in fewer “mixed messages” to principals. The practice of having a portion of the ED’s evaluation determined by the performance of the schools they coach is an interesting supportive policy.

In June 2008, an independent external evaluation consultant was hired to document the effect of the changes to the Principal Coaching Model. As a part of the evaluation, a follow up survey was given to all principals and the same focus group of principals was interviewed. The survey and interview questions guided principals to reflect on the role of coaching support in improving professional practice, with an emphasis on the area of instructional leadership. Principals who received the most intensive support reported that their skill in delivering feedback to teachers on improved classroom practice was enhanced. Principals reported the most significant change in the following areas: being able to recognize the importance of visiting the classroom on a regular basis, being able to identify what to target during those visits, a deeper understanding of the grade level content standards, and the ability to give explicit feedback upon which teachers could immediately act.

Following are some quotes from the principal’s survey:

“The walkthroughs were very, very helpful. The ED always asked me first to share what I saw. It was good for me to hear the ED’s perspective. It helped me to recognize things I’d missed. My coach challenged me to think about how teachers can do better. The walkthroughs helped me go back to grade level teams and guide improvement. This was huge for me.”

The ultimate goal of any school improvement is its effect on increasing student achievement. The question being: Does the support and accountability system as a whole improve student achievement? Chula Vista is a strong, steadily improving district. It is the first large urban district in California to have all of its schools achieve above the 800 mark on the state measure of performance, the API. The perceptions of Principals, Executive Directors and the Superintendent, are that direct, differentiated, on-site coaching on instructional leadership is a strong factor contributing to that steady improvement. The chart below shows how the impact differed based on the level of support provided. Though all groups of schools improved, it is clear that those schools who needed it most, and received the greatest amount of coaching support from the EDs also showed the greatest gains in student learning. 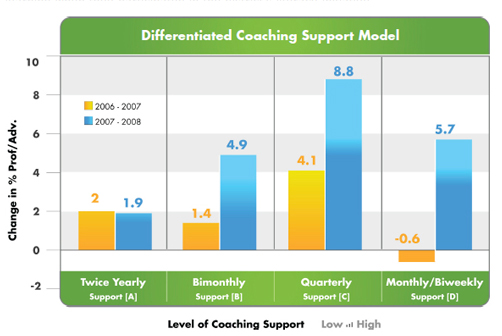 Jeff Nelsen, Ph.D. Co-founder and partner with Targeted Leadership Consulting and former co-director of the New England School Management Program in Boston, Dr. Nelsen has provided training and coaching to more than 2,000 principals and school leadership teams over the past decade, helping schools set and meet rigorous, measurable student learning goals. Previously, Dr. Nelsen was a teacher and principal for 21 years in California. The last school he directed received both state and national recognition for its dramatic increase in student performance. With his Ph.D. in organization and policy studies, Dr. Nelsen has taught graduate students at several universities over the years, and is the former director of the Harvard/ACSA Principals Institute at the University of California-Los Angeles.

Amalia Cudeiro, Ed.D. Co-founder and partner with Targeted Leadership Consulting, Dr. Cudeiro was most recently one of five deputy superintendents for the Boston Public Schools, where her primary responsibilities included recruitment, selection, training, professional development, supervision, and evaluation of principals, headmasters, directors, and cluster leaders. During her tenure in the Boston Public Schools, Dr. Cudeiro was instrumental in the development and implementation of the school district’s Principal Evaluation and Accountability Process. Dr. Cudeiro served for many years as a principal in California public school systems, in the Santa Monica and Baldwin Park school districts. She has also been a Master Practitioner at UCLA. Later, she was one of only eight selected nationally for a fellowship to complete her doctorate in the Urban Superintendent Program at Harvard University, where for the past four years she has served as Adjunct Professor of data, curriculum, and instruction. Her doctorate is from La Verne University.